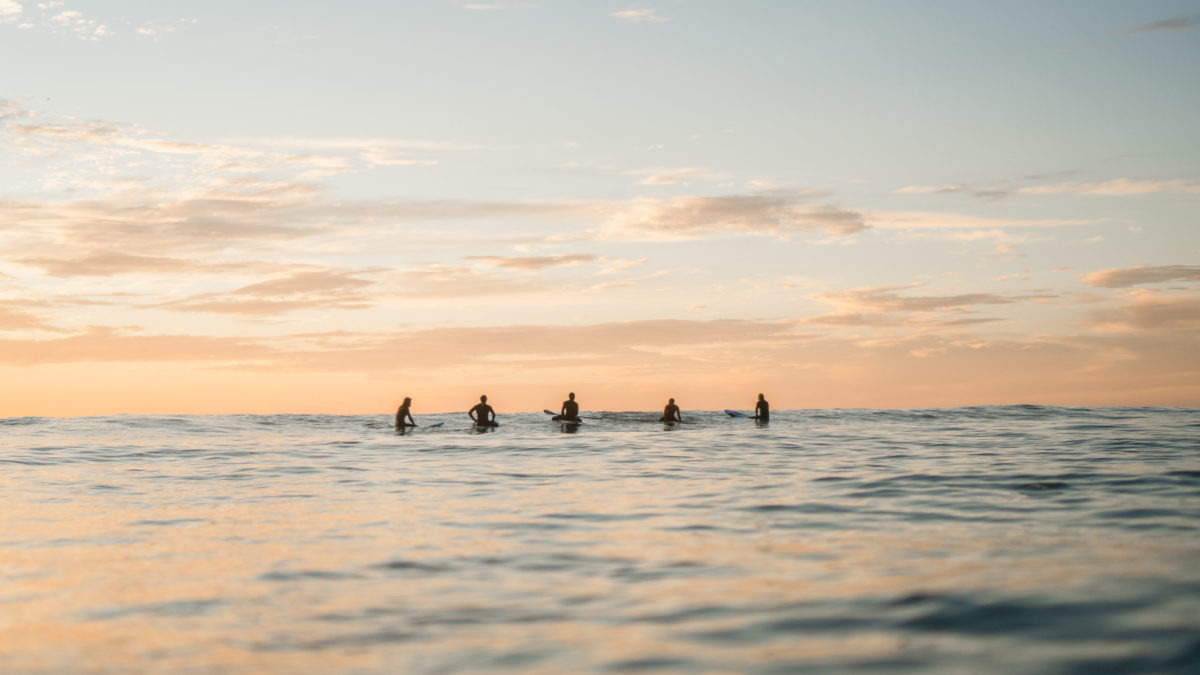 Yoga and surfing is becoming increasingly popular. For us at Blue Mind Surf & Yoga Tribe, yoga and surfing are not just two trendy sports, but a true dream team for those who want to do something good for their body and mind at the same time. We are not talking about yoga exercises on the surfboard, but rather about what combines yoga and surfing. Yoga and surfing are more than just sports. Both stand for a holistic attitude to life, a philosophy of their own. Both yoga and surfing have a positive influence on life and can even change it.

In addition to this, yoga and surfing are even much more connected. Both help and strengthen each other in terms of physical requirements. If one makes progress in one area, this is reflected in the other area as well. And many movements even show direct parallels.

At the beginning, surfing is paddling. Getting into the sea can be an extreme feat while surfing – especially if you have to fight against a stronger current. Since well-developed shoulder and arm muscles are essential. Anyone who practices yoga regularly has a clear advantage here. Because even basic exercises such as the sun salutation and many restraining exercises train appropriate muscle groups.

Anyone who wants to paddle on the surfboard in an optimal and effortless manner also needs high body tension and pronounced back and neck muscles. To achieve a better power transmission of the paddle movements, a light hollow back, tension in the back and stretched, parallel closed legs are important. Many asanas also pay for these parts of the body.

Once in the waves, a suitable wave must be mocked and paddled. This is followed by the take-off. Anyone who has been forced to push himself upright on a surfboard in his life knows how helpful a trained back, trunk and leg musculature is.

In classical yoga exercises, not only are these musculature trained – the sequence of movements at take-off is almost deceptively similar to some typical asanas. Thus, the starting position on the board has clear parallels with the Cobra or the upward facing dog. In the further sequence of movements during take-off, in which a foot has to be brought between the supported hands, one can certainly think of sequences from the classic sun salutations. Standing on a surfboard reminds finally to the yoga position of the warrior.

In addition, not only the power, but also the mobility in surfing is crucial. Regular stretching exercises in yoga practice make muscles and tendons more flexible and supple. Yoga also prevents typical surf injuries such as strains and overstraining the neck and back.

Another important basis for surfing is the balance. Those who do not find their center and thus their balance will soon be frustrated by numerous failed attempts at the take-off. Because the board is more wobbly than you think – especially if you are no longer with the huge beginner softboards on the way.

But not only getting up requires a good balance. Who has managed to stand on the board and surf a wave, which helps even then a pronounced body feeling. Here, yoga exercises such as the tree, the eagle or the crescent can open up new possibilities for every surfer. They ground, promote balance and train stability.

Of course, the so-called « wash machines » are also part of surfing. After a failed attempt, the ocean likes to show you where to go. He makes no distinction between beginners, advanced or professionals – they are all swirled like a grain of sand through the water. And then, first of all, stop breathing. In order to prepare for this, breathing exercises (pranayama) from yoga practice help. Among other things, it increases the lung volume and reduces the oxygen requirement. Regular pranayama also train concentration and lead to inner peace and more ease.

Inner peace is essential when surfing. Because surfing looks easier than it is. And that’s why an extra dose of patience is needed. It’s not just about patiently waiting for optimal conditions and the right wave – because nature can not be influenced. It’s also about being patient with yourself. If you put yourself under pressure, you quickly lose the ease and fun of surfing. So you need perseverance, mental strength and serenity, because only very few surfing beginners will be more successful on the first day. Learning to surf properly takes time – and even true experts never learn.

Patience is also one of the key elements in yoga practice. Especially as a beginner, one can not imagine how many of the asanas that others perform with ease will someday work. Exercises like the forward bend, the crow or the headstand take time. The most important thing is to accept one’s own boundaries, to be mindful of oneself, to avoid unnecessary pressure and frustration. In addition, you have to appreciate even the smallest progress. All of these are absolute core competencies when surfing! Serenity is also needed under water. After all, those who panic after a wipe-out (falling into the broken wave) underwater unnecessarily waste power and consume many times more oxygen.

The fear of drowning is (almost) always unfounded. It arises in the head – and can be controlled well, if one deals with his mind with other things such as counting. This is exactly what you learn during the relaxation and meditation exercises in yoga. The mind becomes busy, counting or conscious breathing, to gently control and eliminate other thoughts (the so-called monkey mind).

The heartfelt relaxation and satisfaction after a surf or yoga session is very similar. Both surfing and yoga, you can switch off wonderfully. Both are active relaxation; both are just being; both are a life in and for the moment. What is often theory and mind-controlled in yoga meditation becomes practice on the surfboard. Waiting for the perfect wave, you float on your surfboard in the water and let your gaze wander into the distance. You are one with yourself and nature. An uplifting feeling! The speed of water sports does not allow top-heaviness at all.

There is no time to think about it. The thinking is reduced: As soon as a suitable wave comes, the surfer aligns his board, paddles to be caught by the wave and jumps on the board at the right moment. He straightens his arms, shoulders and the upper body, keeping the balance, steering, gliding, shifting its weight to change direction, bending the knees – this is the full presence and pure asana practice in the blue element.

Finally, we conclude: Yoga and surfing are made for each other – a real dream team for body and mind! In our new Surf & Yoga Villa, which opens fall 2019 in Tamraght, yoga will be included in all surf packages, so that our guests can convince themselves of this dream team.